Before Ultra-Guard opens a service center, I personally travel to the city for a personal experience of the area and the people.

Charleston was our first Location in South Carolina.  And like all our service centers, I wanted to immerse myself in the culture, sights and happenings of Charleston.

Charleston is the oldest and largest city in the state of South Carolina, known for its role in the American slave trade.

The estimated population of the Charleston metropolitan area, comprising Berkeley, Charleston, and Dorchester counties, was 787,643 residents as of 2018, the third-largest in the state and the 78th-largest metropolitan statistical area in the United States. 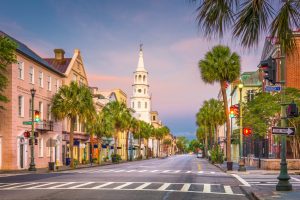 Charleston was founded in 1670 as Charles Town, honoring King Charles II of England. Its initial location at Albemarle Point on the west bank of the Ashley River (now Charles Towne Landing) was abandoned in 1680 for its present site, which became the fifth-largest city in North America within ten years. One of the key cities in the British colonization of the Americas, Charles Town played a major role in the slave trade, which laid the foundation for the city’s size and wealth, and was dominated by a slavocracy of plantation owners and slave traders.[8] Independent Charleston slave traders like Joseph Wragg were the first to break through the monopoly of the Royal African Company, pioneering the large-scale slave trade of the 18th century. Historians estimate that “nearly half of all Africans brought to America arrived in Charleston”, most at Gadsden’s Wharf.  Despite its size, it remained unincorporated throughout the colonial period; its government was handled directly by a colonial legislature and a governor sent by London, UK. Election districts were organized according to Anglican parishes, and some social services were managed by Anglican wardens and vestries. Charleston adopted its present spelling with its incorporation as a city in 1783 at the close of the Revolutionary War. Population growth in the interior of South Carolina influenced the removal of the state government to Columbia in 1788, but the port city remained among the ten largest cities in the United States through the 1840 census.[10] The only major antebellum American city to have a majority-enslaved population, Charleston was controlled by an oligarchy of white planters and merchants who successfully forced the federal government to revise its 1828 and 1832 tariffs during the Nullification Crisis and launched the Civil War in 1861 by seizing the Arsenal, Castle Pinckney, and Fort Sumter from their federal garrisons.

I took several tours while in Charleston. One of which was a ride on the Schooner Pride.

Considered one of the top five things to do in Charleston, an exhilarating romantic sunset sail to escape the crowded streets and sweltering heat of downtown Charleston, SC. I was able to take in the Holy City the way it was meant to be seen, from the peaceful waters of Charleston Harbor, and mingle with dolphins, pelicans and gulls on my two-hour sailing tour.

Next, I went on some of the walking tours.

There are 5 Self-Guided walking tours of Charleston.

I’m a city guy through and through. That means I innately hate driving, the inconvenience of having to go somewhere where I can’t just walk, and the general idea of something that I need not being accessible to get to. Because of these things, I’m always very picky with where I want to travel. Cities that prove themselves to be extremely accessible and easy to get around automatically get my bonus.

Luckily, Charleston is one of those great cities that are easy to navigate and get around! Plus, you don’t really need to get a car to get around and see all the charming streets, alleys, and corners this city has to offer. You can easily get from one end of the city to the other by foot, which is the best way to explore it!

As you’re walking through Charleston, you’ll be able to go as slow or as fast as you’d like and see as little or as much as you want during your stay. If you don’t mind spending a little money, you can definitely sign up for a guided tour with a professional (best for people who want to learn the history and just follow along with a group); OR you can just take the adventurous route and explore on your own (my preferred method)!

Since Charleston was originally founded as a harbor city, it’s natural that a lot of the properties near the original waterfront areas would have a lot of history and character. The French Quarter is full of colorful streets, cobblestone alleys, and unique looking churches (including one that looks like it tilts to the side). This is a great route to get a feel for the old, historic part of Charleston.

While in Charleston I stayed at the Hotel Bennett in downtown Charleston.

Hotel Bennett Charleston has a restaurant, seasonal outdoor swimming pool, a fitness center and bar in Charleston. Among the facilities at this property are a 24-hour front desk and room service, along with free Wi-Fi throughout the property. Private parking is available on site.

Historic District is a great choice for travelers interested in architecture, shopping and walking.

As to food I recommend three Restaurants:

Second, I am recommending Fig, an upscale bistro setting that specializes in Southern Classics with seasonal ingredients.

Well, so much for my visit to Charleston.  We now have an Ultra-Guard service center that serves the Charleston design trade with the only 0n-site nano-tech fabric protection.  Our STAIN FREE Formula also has an ultra-violet inhibitor that reduces sun fade.  It’s absolutely the best fabric guard available.  When it comes to stain protection, it is the interior designer’s choice, from protecting sofas to area rugs.

Ultra-Guard, Inc. has almost 200 service centers across the county applying our fabric guard to hundreds of pieces per year with our service warranty calls at less than 5%.